Amid pandemic, Internet cafes turn to cryptocurrency mining for profit – 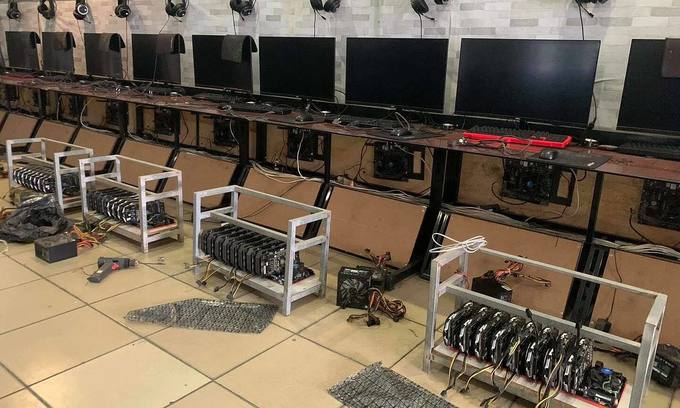 A row of computers are converted to cryptocurrency mining machines in an Internet cafe in HCMC. Photo courtesy of Tinhocngoisao via Facebook.

Dinh Thi My Le, owner of a gaming cafe in District 3, said her business was forced to close down following a social distancing order in Ho Chi Minh City last week.

“At the same time, Bitcoin’s value was rising sharply, so my friends said I should switch to cryptocurrency mining as machines would encounter errors if they stay inactive for too long,” she said, adding her cafe was one of the first in HCMC to use the high-quality RTX 3080 graphic card.

“Whatever is dug is sold within the day. Profits depend on cryptocurrency values, but are much higher than my usual business,” Le said. A gaming cafe with 25 computers may bring in around VND3 million ($130) a day by mining cryptocurrency, instead of the usual VND2 million through normal gaming business. Computers using powerful graphic processing units may bring in even more profit, she added.

Computer parts industry insiders said the price of graphic cards rose dramatically during Tet, thanks to impacts of the pandemic and the ongoing Bitcoin fever around the globe. Right now, a RTX 3080 card could cost VND30 million, with supply still falling far short of demand.

Switching from gaming to mining cryptocurrency is also simple, requiring only extra software and nothing more, said Le.

“We sell cryptocurrency within the day, not saving it so the money could come in immediately and we could stop it anytime we want to. The machines are already available, so the main cost would be electricity. Wherever power’s cheap, there will be more profit,” Le said, adding her business has six branches in total.

The value of Bitcoins hit $52,000 on Wednesday, a record high for the cryptocurrency as analysts warned against the sustainability of such prices amid elevated volatility, Reuters reported.