JTA — Many of Twitter’s cryptocurrency zealots are often notorious trolls, but one particular thought leader stands out from the rest. He happens to be a rabbi.

“Twitter people either use it to scream at each other and not be nice, which I don’t like,” says micro-influencer Rabbi Michael Caras, also known as @thebitcoinrabbi. ”I enjoy connecting with my two communities through Twitter, both Jewish Twitter and Bitcoin Twitter.”

Caras, a rabbi associated with the Hasidic Chabad-Lubavitch movement, is fascinated by the way that Bitcoin, both the network and the asset, relates to halacha (Jewish law). And since he’s quite vocal about it online, Caras says that strangers slide into his Twitter messages each week to ask for advice and spiritual guidance on the topic.

Before serving as a public bridge between the two worlds, Caras studied at Yeshiva Ohr Tmimim in Israel and now teaches both Judaism and technology classes at Maimonides Hebrew Day School in New York. Caras has been interested in Bitcoin since 2017, and in 2019 he published a children’s book about it that has sold more than 10,000 copies.

The book, a secular introduction to basic economics for kids, tells a tale of children learning about how to use Bitcoin as money by running a lemonade stand in a town called Bitville.

Caras has also spoken at synagogues and Jewish youth groups about Bitcoin and Judaism, including how the history of money is discussed in the Torah.

“There are people who are Jewish but not observant who have never talked to a rabbi any other time,” he says. “Because they feel some type of kinship with me through Bitcoin Twitter, they’ll feel comfortable that I will give them relevant information without lecturing them.

“I also have a WhatsApp chat where people often ask me privately for guidance as well. Sometimes they have a Bitcoin question, in some way, and I’m happy to help. I’m happy to be that resource for the community, especially for things like private key management.”

Although there are thousands of things now called cryptocurrency, Bitcoin is the world’s oldest and most decentralized blockchain network, with the most diverse population of users as of 2021. People can store, send and receive currencies like Bitcoin without a third party, like a bank.

Most avid cryptocurrency users keep track of transactions with a public network and a ledger called a blockchain. For example, the Bitcoin ledger is a record of all transitions with bitcoin (the asset). However, many cryptocurrency traders prefer to use mainstream financial marketplaces (such as Fidelity or the Israeli company eToro), which don’t necessarily need to use the public blockchain for all transactions. 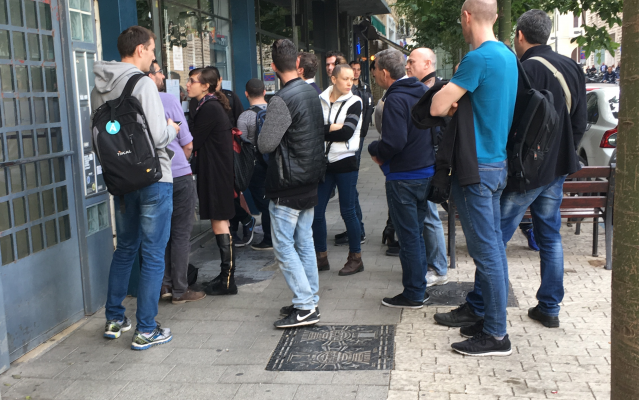 Caras is among the avid users who prefer to participate in the grassroots Bitcoin network, transacting with open source tools rather than merely trading cryptocurrency like stocks.

Caras, like many rabbis, is a huge fan of old records, ledgers and sacred secrets. With regards to the “private key management” he mentioned, bitcoin users keep track of their bitcoin using a unique password called a private key — protect that key, and the bitcoin will remain in your custody. That’s why knowledge related to private key management is so important to Caras.

The public blockchain ledger is not unlike the way Jewish communities maintained written records about their societies for thousands of years. This combination of history and technology fascinates Caras.

“We have ‘the chain of tradition’ quite literally in Hebrew, this point of following the tradition back in written history,” he says. “We are…

Bitcoin price slides amid EU call to make transfers traceable, and rise of