The prices of leading cryptocurrencies like bitcoin (CRYPTO:BTC) and Ethereum (CRYPTO:ETH) routinely move 10% or more peak to trough in a given week. For investors, this level of volatility can be stressful and frustrating. However, if you believe in crypto’s long-term thesis, volatility can work in your favor.

Exchanges like Nexo, BlockFi, Gemini, and Coinbase (NASDAQ:COIN) pay attractive interest rates on bitcoin, Ethereum, stablecoins, and other leading tokens. Like regular banks, these companies make money by lending assets to customers at a higher interest rate than they pay. Let’s dive into a few different crypto assets and their interest rates to determine which one may be best for you. 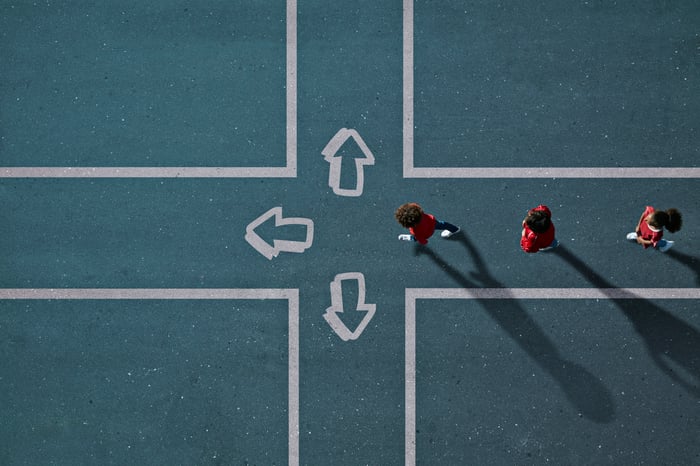 Bitcoin tends to garner the spotlight when it comes to cryptocurrency discussions, but the real star over the last year or two has been Ethereum. Despite being down over 50% from its high, Ethereum is still up 190% year to date and over 800% over the past year. 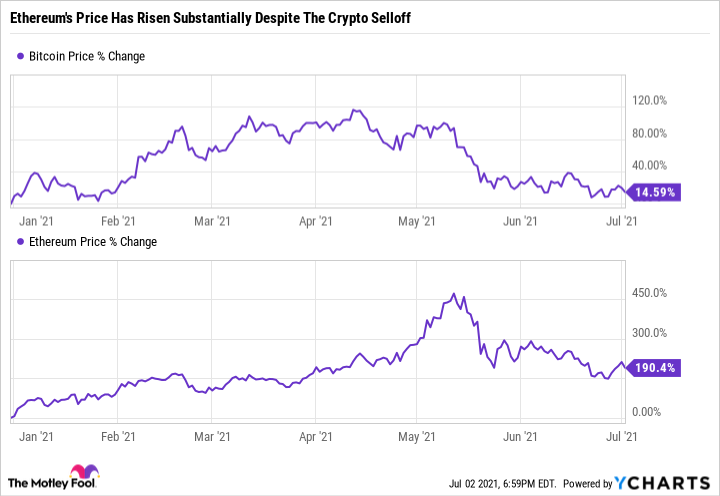 Ethereum has gained recognition for its versatility. For example, several well-known alternative coins like Chainlink and Polygon are hosted on the Ethereum blockchain. Most non-fungible tokens (NFTs) operate on Ethereum’s blockchain as well. An NFT represents digital ownership of an asset, whether it’s a piece of art, a title to a car or house, or an NBA Top Shot moment.

In this way, Ethereum’s blockchain is similar to a smartphone in that it can host many different applications that serve different purposes. One of the most exciting use cases of Ethereum is for smart contracts. Contract law can be very complicated. A smart contract, hosted on the Ethereum blockchain, enables two willing parties to enter into an agreement that automatically executes based on the outcome of customized conditions. The advantages are immense. As a 2018 Harvard Law School paper puts it, “Human intervention, including through a trusted escrow holder or even the judicial system, is not required once the smart contract has been deployed and is operational, thereby reducing the execution and enforcement costs of the contracting process.”

Sergey Nazarov, the founder of Chainlink, used the example of crop insurance to describe the use of a smart contract. To paraphrase, crop insurance can be purchased by a farmer in case of a drought, flood, or another circumstance that prevents crop yield. A smart contract could be written that automatically pays a predetermined amount of insurance based on a fixed set of risk factors. The advantages are that there’s no need for payment middlemen, a legal authority, or other entities gumming up the process. In theory, its simplicity would make the contract more transparent, more accessible, and cheaper by cutting out third parties.

Entities like BlockFi pay up to a 4% annual percentage yield (APY), distributed monthly, on Ethereum. Coinbase pays 0% APY on Ethereum, but it does offer 5% APY if a customer chooses to stake their Ethereum tokens. Ethereum is transitioning from proof-of-work to proof-of-stake, which could help the token’s governance and shrink its environmental footprint. Staking prevents a user from trading Ethereum until this process is complete.

Bitcoin is far less dynamic than Ethereum — its simplicity is what makes it so attractive. A limited supply and a network that has proved its stability despite numerous hacking attempts have helped bitcoin garner international recognition. Bitcoin is far too volatile to be considered a viable currency, but its use cases as a commodity, particularly as a store of value, are becoming clear.

Contrary to popular belief, bitcoin doesn’t have to replace fiat currencies to become successful. Rather, it can be a globally recognized vehicle that provides value in cases of economic instability. Think hyperinflation, government…