Bitcoin Cash (BCH) Closes Last Hour Down $-1.38; Moves Up For the 2nd Straight

The Hourly View for BCH

At the time of this writing, Bitcoin Cash’s price is down $-1.38 (-0.26%) from the hour prior. This is the 2nd hour in a row Bitcoin Cash has seen its price head down. As for the trend on the hourly timeframe, we see the clearest trend on the 100 hour timeframe. Of note is that the 50 hour changed directions on BCH; it is now pointing up. The moving averages on the hourly timeframe suggest a choppiness in price, as the 20, 50, 100 and 200 are all in a mixed alignment — meaning the trend across timeframes is inconsistent, indicating a potential opportunity for rangebound traders.

Bitcoin Cash closed the previous day up 2.33% ($12.31); this denotes the 2nd straight day it has gone up. The price move occurred on volume that was down 40.65% from the day prior, but up 14.75% from the same day the week before. Out of the 7 instruments in the Top Cryptos asset class, Bitcoin Cash ended up ranking 2nd for the day in terms of price change relative to the previous day. Here is a daily price chart of Bitcoin Cash. 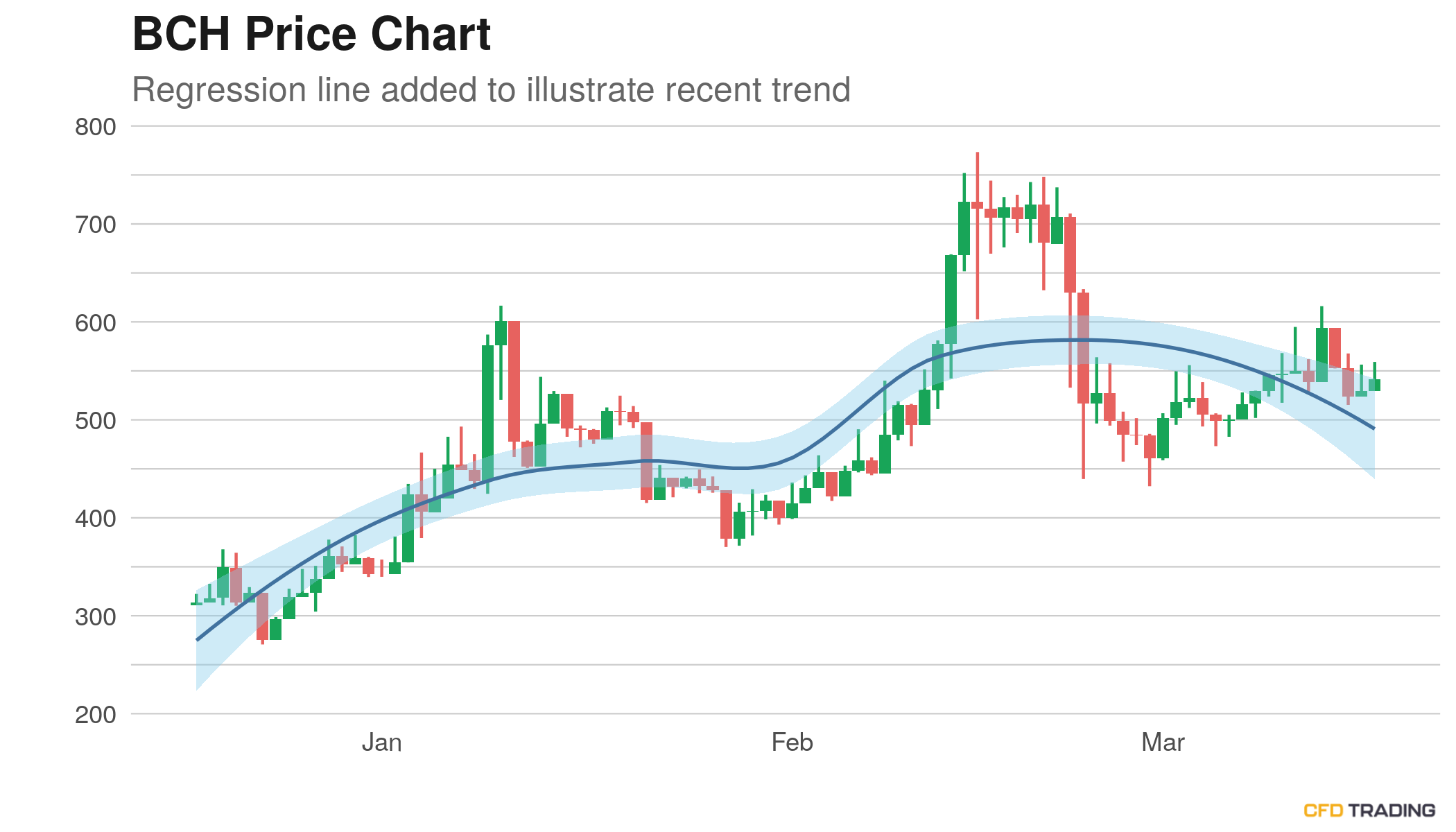 Moving average crossovers are always interesting, so let’s start there: Bitcoin Cash crossed above its 50 day moving average yesterday. Volatility for Bitcoin Cash has been contracting over the past two weeks relative to volatility over the past month. Whether volatility reverts will be something to watch. Trend traders will want to observe that the strongest trend appears on the 30 day horizon; over that time period, price has been moving down. For additional context, note that price has gone up 9 out of the past 14 days.

For laughs, fights, or genuinely useful information, let’s see what the most popular tweets pertaining to Bitcoin Cash for the past day were:

For a longer news piece related to BCH that’s been generating discussion, check out:

Bitcoin cash is the cryptocurrency created due to the hard fork of Bitcoin, that took place in 2017….As we know it, that does not always happen as we want.  As Bitcoin was facing scalability issues, some of the miners proposed increasing the block size of Bitcoin….This disagreement led to the hard fork and Bitcoin’s blockchain got separated into Bitcoin (BTC) and Bitcoin Cash (BCH).  Over the years Bitcoin has garnered more and more popularity….Bitcoin cash, therefore, is not Bitcoin….As there is a significant rise in competition, the major reason for the hard fork is yet to yield some results; enabling more transactions within each block.   Bitcoin Cash was the result of the debate regarding scalability, transaction processing, and blocks….And in November 2018, the Bitcoin Cash network experienced its hard fork, which resulted in the creation of yet another bitcoin derivation called Bitcoin SV (Satoshi’s Vision).

Bitcoin SV Cryptocurrency Bullish By 13% In The Last 6 Hours