The Hourly View for BCH

At the moment, BCH’s price is down $-2.09 (-0.4%) from the hour prior. This move is a reversal from the hour prior, which saw price move up. Regarding the trend, note that the strongest trend exists on the 100 hour timeframe. Of note is that the 20 hour changed directions on BCH; it is now pointing down. The moving averages on the hourly timeframe suggest a choppiness in price, as the 20, 50, 100 and 200 are all in a mixed alignment — meaning the trend across timeframes is inconsistent, indicating a potential opportunity for rangebound traders.

The choppiness in the recent daily price action of Bitcoin Cash continues; to start today, it came in at a price of 529.12 US dollars, up 1.04% ($5.44) since yesterday. As for how volume fared, yesterday’s volume was up 96.01% from the previous day (Monday), and up 172.92% from Tuesday of the week before. Out of the 7 instruments in the Top Cryptos asset class, Bitcoin Cash ended up ranking 5th for the day in terms of price change relative to yesterday. Let’s take a look at the daily price chart of Bitcoin Cash. 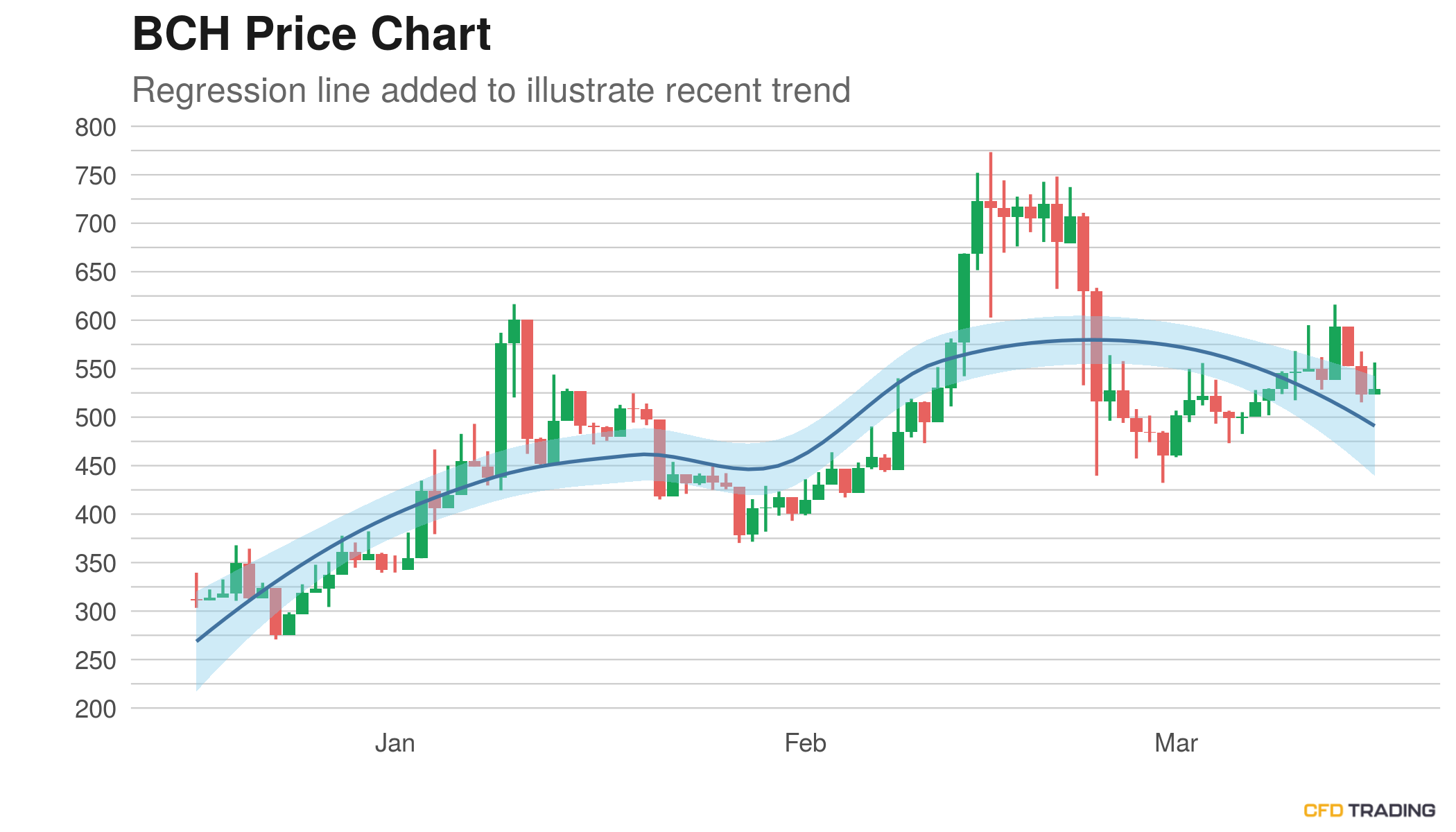 The first thing we should note is that the current price of Bitcoin Cash is sitting close to its 20 and 50 day moving averages; moving average crosses often indicate a change in momentum, so this may be worth keeping an eye on. Volatility for Bitcoin Cash has been contracting over the past two weeks relative to volatility over the past month. Whether volatility reverts will be something to watch. The clearest trend exists on the 30 day timeframe, which shows price moving down over that time. Or to view things another way, note that out of the past 30 days Bitcoin Cash’s price has gone up 15 them. As for those who trade off of candlesticks, we should note that we’re seeing pin bar pattern appearing here.

For laughs, fights, or genuinely useful information, let’s see what the most popular tweets pertaining to Bitcoin Cash for the past day were:

As for a news story related to Bitcoin Cash getting some buzz:

That’s right- the system was out of service for over a full week, with the development of events we were just discovering that it was not only that ATM that was not operational but all ATMs that operate with Visa banking system managed by SIMO (Mozambican interbank company) because the company that supplied the System unilaterally decided to shut down its entire powerful system because this same Banking company was indebted to them….Exactly they pulled the switch button off and the whole Mozambican banking system was paralyzed and nobody could withdraw any money from these banks, everything was blackout, huge queues were made in the Banks but all in vain because the company controlled the entire system which is a centralized entity that could demand and enforce what the State owed without even worrying about the customers who were left without access to financial banking services.