Wednesday’s huge sell-off in the cryptocurrency market saw a wide range of coins and tokens lose between 30% and 50% of their value in a few hours as indiscriminate selling shattered the market’s previously bullish sentiment. The near $1 trillion sell-off, sparked by fears of a further clampdown on cryptocurrency usage in China, and negative tweets from Tesla’s Elon Musk, wiped out weeks, and in some cases months, worth of gains, with leveraged accounts trying to unwind long positions adding fuel to fire. The market has pared back some of these losses but sentiment remains weak and it will take a long time to return back to the heady times of earlier this year, if at all. The current extreme levels of volatility and weak sentiment do not make good bedfellows.

Overnight news that the US Treasury Department wants new rules put in place, requiring cryptocurrency exchanges to report transactions over $10,000, has not helped sentiment. The move, part of President Biden’s upgraded measures to prevent tax avoidance, would likely come into force in 2023 if agreed.

Bitcoin, an underperformer over the last few months, especially against Ethereum, is stabilizing around $41,000 after touching a flash-low of $30,000 on Wednesday. The sell-off wick on Wednesday’s candle has now been recovered, but it is difficult to know how much of the heavy two-week sell-off from $60,000 can be recouped. The weekend can be a volatile period for cryptocurrencies, with volume usually lower than during the week, so it may be wise for traders to wait and see where BTC is on Monday before making any decisions.

JOMO is the New FOMO: Trade with the Joy of Missing Out 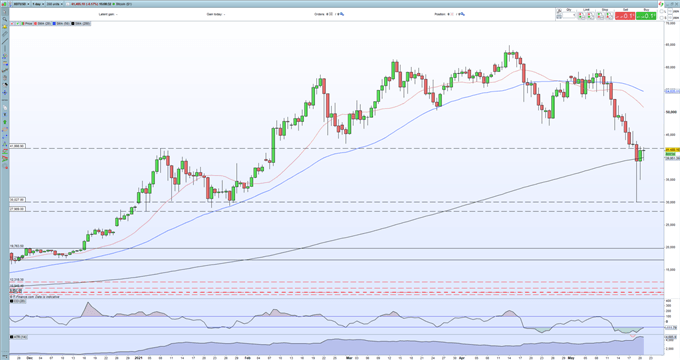 Ethereum has a similar chart pattern to Bitcoin over the last 3 days and has also given back a chunk of its recent outperformance against its peer. The ETH/BTC spread started the year around the 230 level and rallied all the way up to a peak of 812 last Friday. The pair now trades around 662 after touching a sell-off low of 608 on Thursday. 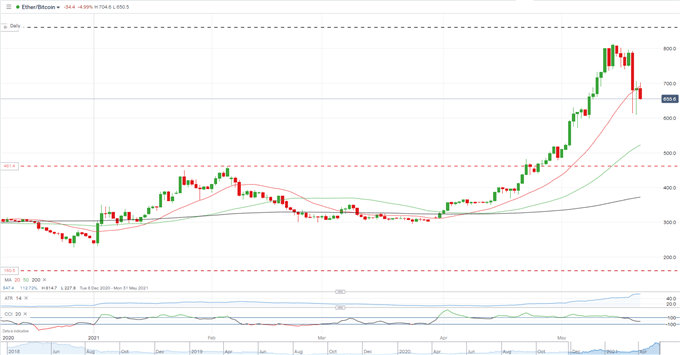 The alt-coin market also sustained very heavy losses mid-week with a host of the current market favorites, including Cardano (ADA), Dogecoin (DOGE) and newcomer Internet Computer (ICP), all hammered. This sector will find it even harder than the more established coins to recover.

What are your views on Bitcoin (BTC),Ethereum (ETH) – bullish or bearish?? You can let us know via the form at the end of this piece or you can contact the author via Twitter @nickcawley1.

Litecoin Cryptocurrency Over 32% Down In The Last 7 Days

Binance NFT Marketplace Launch: What to Expect on June 24