Coinbase (NASDAQ:COIN) stock has had a rocky ride since it went public last week. While the stock opened at roughly $328 per share on listing day, it has trended lower since, to about $293 per share as of yesterday. Although the decline is partly driven by the fact that the company went with a direct listing, enabling insiders to sell shares right away without the usual post IPO lockup period, the cryptocurrencies that Coinbase’s platform enables customers to buy and sell have also corrected. For example, the price of Bitcoin – the largest crypto asset by market cap –  has declined by almost 20% since Coinbase went public. So can Coinbase’s stock hold up through a potential crypto bear market?

About 90% of Coinbase’s revenues come from transaction revenues, which are very sensitive to the pricing trend for cryptocurrencies (particularly for bellwether Bitcoin). This, in turn, influences the number of monthly transacting users (MTU) on the platform and the total value of transactions. As Bitcoin prices roughly doubled over Q1, the company saw a quarterly trading volume surge to about $335 billion – that’s higher than the trading volumes for the full years 2019 and 2020 combined. Now, if prices decline, MTUs and transaction volumes on the platform will likely decline sharply, hurting Coinbase.

Bitcoin prices are being impacted by a couple of factors. Firstly, with Covid-19 vaccinations picking up in the U.S. and the economy opening up further, investors could be moving funds away from somewhat speculative cryptos to real economy assets. Moreover, there have been reports that the Biden Administration is looking to double the capital gains tax on the wealthiest Americans to 39.6% from the current 20%, and this has also likely hurt cryptocurrencies, which have rallied big over the last year. That said, we think that the inherent cyclicality in crypto prices and transaction revenues is priced into Coinbase stock at current levels. The stock trades at just about 11x forward revenues, despite the fact that revenue growth stood at 139% last year and is poised to accelerate further this year.

Coinbase, the largest U.S. cryptocurrency exchange, is expected to go public on April 14, via a direct listing on the Nasdaq exchange with the ticker COIN.  Although the proposed listing price isn’t known yet, investors expect that valuations could top $100 billion, given the strong interest in cryptocurrencies and the company’s stellar earnings for Q1 2021. In our interactive dashboard Coinbase Revenues: How Does COIN Make Money? we provide an overview of Coinbase’s business model and key revenue streams. Parts of the analysis are summarized below.

Coinbase’s platform enables retail and institutional customers to buy, sell, and store cryptocurrencies such as Bitcoin and Ethereum. The company primarily reaches customers via its Coinbase, Coinbase Pro, and Coinbase Wallet apps and its websites.  Coinbase had a total of about 56 million retail users as of Q1 2021. Roughly 90% of the company’s revenues (as of 2020) came from the transaction fees from trading and via services such as storage and analytics. Coinbase charges its customers transaction fees (estimated at about 0.5%) based on the volumes that they trade, with larger trades seeing lower fees. The company’s commissions are higher than traditional exchanges, given the higher transaction costs for Bitcoin and other cryptos. About 10% of the company’s revenues come from sales of its own crypto assets to customers. 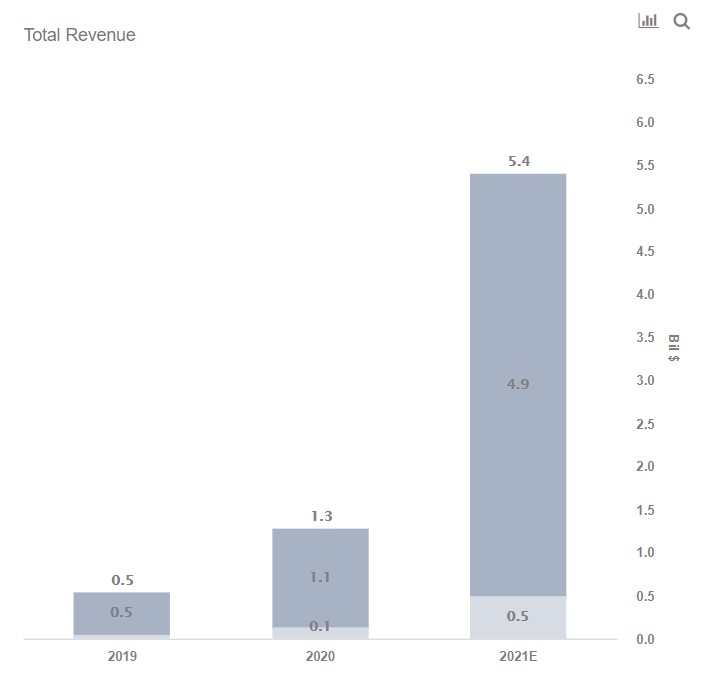 How Have Revenues Trended?

The company’s transaction revenues are heavily dependent on the pricing trend for cryptocurrencies (particularly for bellwether Bitcoin). This, in…

Money Stuff: Crypto Markets Are Where the Fun Is

Bitcoin (BTC) Rallying Back, Ethereum (ETH) and The Alt-Coin Market Soar to

I have crypto FOMO! ‘I’m too old to sit and hope I can make up for the lost