It has been more than 1½ years since regulations were introduced in the local cryptocurrency landscape and several months since registered digital asset exchanges (DAXs) began operating. Yet, a considerable chunk of trading continues to occur outside the regulated cryptocurrency space, industry players estimate.

Kelvyn Chuah, co-founder and managing director of Sinegy Marketplace (Sinegy), and Hong Qi Yu, founder of Tokenize Exchange (Tokenize), estimate that at least half of the total monthly cryptocurrency trading volume in Malaysia takes place outside regulated exchanges. Meanwhile, David Low, Luno’s general manager for Southeast Asia, says using a rough estimate based on website visits and posted trading volume in Malaysia, at least RM100 million worth of cryptocurrency is traded outside the regulated channel each month, which is more than half of total trades in the country. “This leaves some investors unprotected,” he says.

“The number is just a very conservative estimate, as unregulated exchanges that operate from countries outside Malaysia facilitate trading of many more cryptocurrencies than the four listed on our platform (bitcoin, ether, ripple and litecoin).

“These unregulated exchanges do not just operate in the spot market, but also offer derivatives and are involved in margin lending. These are the so-called ‘sexy’ services, and the trading volume in those spaces has not yet been considered.

“I also arrived at that number by assuming that cryptocurrency trades that happen through private chat groups make up 30% of the estimated trading volume that goes through unregulated exchanges. But it could be higher,” he says.

While the size of the unregulated cryptocurrency market has yet to pose a systemic risk to the financial markets, it is a worrying trend if unregulated players are allowed to continue to launch marketing campaigns to lure local investors and grow the unregulated space at a rate faster than that of the regulated one. Investors could be more susceptible and fall prey to scams. When they become victims, they will have no legal recourse. 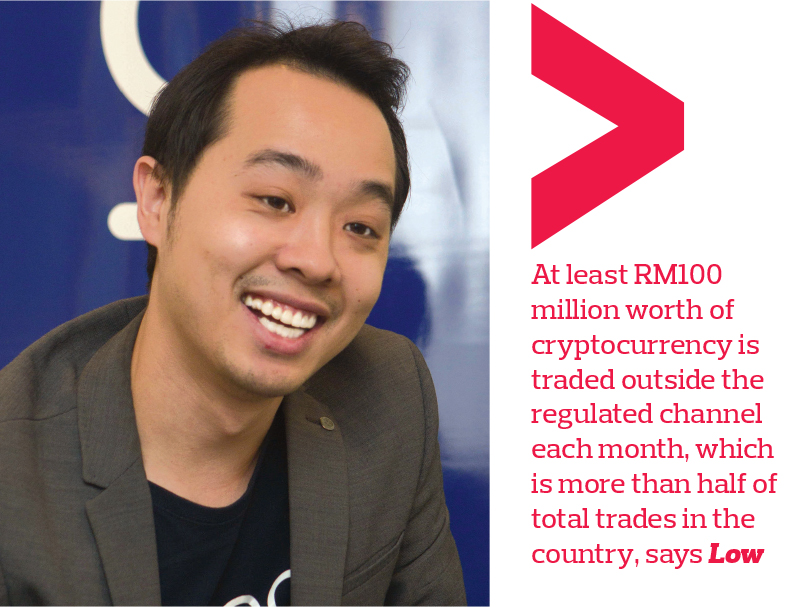 “For instance, we heard of cases where some unregulated P2P (peer-to-peer) platform users used fake banking receipts to scam victims of their bitcoin. Let’s say I am selling bitcoin to you and you are paying me RM5,000 through interbank GIRO, which takes one to two working days for the money to be go through. Instead of actually performing the transaction, you generate a fake receipt. [I may not check my account to verify the transaction and instead] would send you my bitcoin in that one to two days,” says Low.

“Investors [in this case, the seller] will have no legal recourse against the scammers when things like this happen.”

Chuah concurs. “We have heard that users who traded through unregulated exchanges and P2P platforms did not get the money or amount of bitcoin they were supposed to receive. Some people are capable of gaming the system.

“In other cases, you might receive fiat currency through a third-party bank account instead of the person with whom you are supposed to trade. In this case, you don’t know what you might be getting yourself involved in and whether the money is clean,” he says.

Meanwhile, local scams related to cryptocurrencies have been on the rise. Low says Luno and other regulated exchanges have organised educational events for the Royal Malaysia Police (PDRM), as the latter is looking more seriously into the cryptocurrency-related space.

While Washington dithers, Wyoming and other US states mine for crypto gold

‘Dr. Doom’ economist Nouriel Roubini says bitcoin is not a hedge against