March has begun with the continued growth of the cryptocurrency market as all coins from the top 10 list have come back to the green zone.

Last Saturday, the Bitcoin (BTC) price held in a fairly wide sideways range between the support of $46,000 and the resistance of $48,000. On Sunday, sellers knocked the pair out of the sideways channel and tested the $43,100 level, setting a weekly low at $43,021. 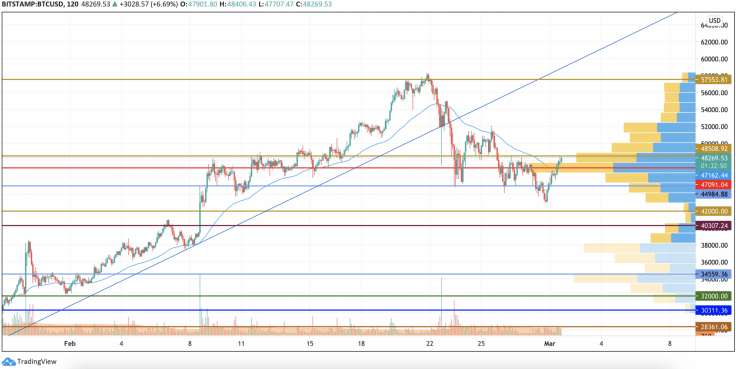 The pair managed to recover within the sideways range last night and, in the morning, the growth stopped in the area of ​​the POC line ($47,037). In the first half of the day, buyers will try to break through to the upper border of the sideways range. But if the buying volumes are as modest as tonight, then bulls will not be able to gain a foothold above the resistance of $48,500, and movement in the sideways channel will continue until the end of the day.

It should also be said that another weak support area is seen in the area of ​​$44,500, which today may limit the rollback if sellers begin to press and squeeze the pair out of the sideways range.

Throughout the day on Saturday, buyers tried to gain a foothold above the resistance of $1,500, but they failed to form a powerful bullish impulse. On Sunday night, the bears pushed the pair below the weekly low, and at the end of the day pierced the level of $1,300, updating the local minimum to $1,293. 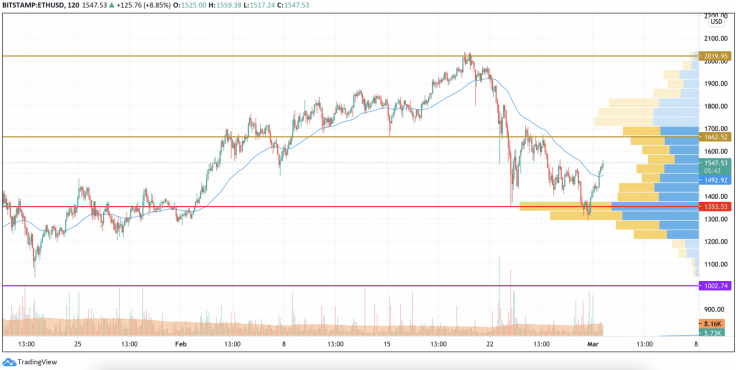 Over the past night, there has been increased demand for Ethereum on the market. As a result, the price crossed the POC indicator line ($1,345) and recovered to the $1,460 area in the morning. One believes that today the resistance of $1,600 will continue to restrain the growth of the ETH price. Only a strong bullish impulse will allow the pair to gain a foothold above the level of average prices.

Yesterday, the XRP price fell out of the blue sideways range and set a local minimum at $0.393. Over the past night, buyers tried to return the pair to the channel, but by morning they were unable to overcome the resistance of the lower border at the level of $0.430. 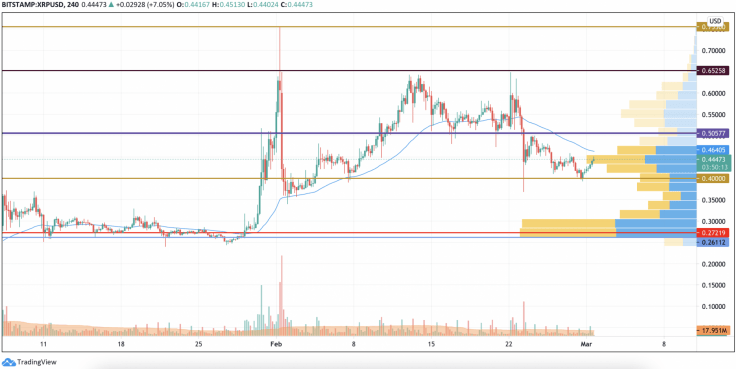 If bears resume the onslaught, the price will test the $0.350 level.

Read More:Has the correction of the top coins on the market ended yet?