How will EOS perform in June’s crypto market? | CoinJournal

EOS plummeted in price during May’s crash — are investors now looking at a bargain?

Within just a month of hitting the $14 price point, the decentralised systems infrastructure EOS is back to fluctuating between $4 and $7, leaving investors puzzled about the future of the price of the token. The altcoin, which focuses on providing a platform for commercial-scale Decentralised Applications (dApps), has often been highlighted as a competitor to Ethereum.

With concerns about Ethereum 2.0 heightening as deadlines become more and more stretched, could June be an opportunity for EOS to pick up some steam? In this article, we’ll examine the current price of EOS, look at some factors that could affect its price in June, and finally make a forecast for the EOS price this month.

During the early phases of its ICO, EOS hit its all-time low of $0.48 but the coin soon managed to generate interest and reached the $1 price level. By April 2018, weeks after EOS was officially launched, the token had managed to create much hype and enthusiasm, leading to its all-time high price of $22.89. However, the attraction towards the new token in the market soon died down and the negative sentiment surrounding Bitcoin also affected the token. EOS ended the year at $2.56. Since then, while the token has occasionally crossed the $10 price point, it has failed to maintain a strong hold on that level. 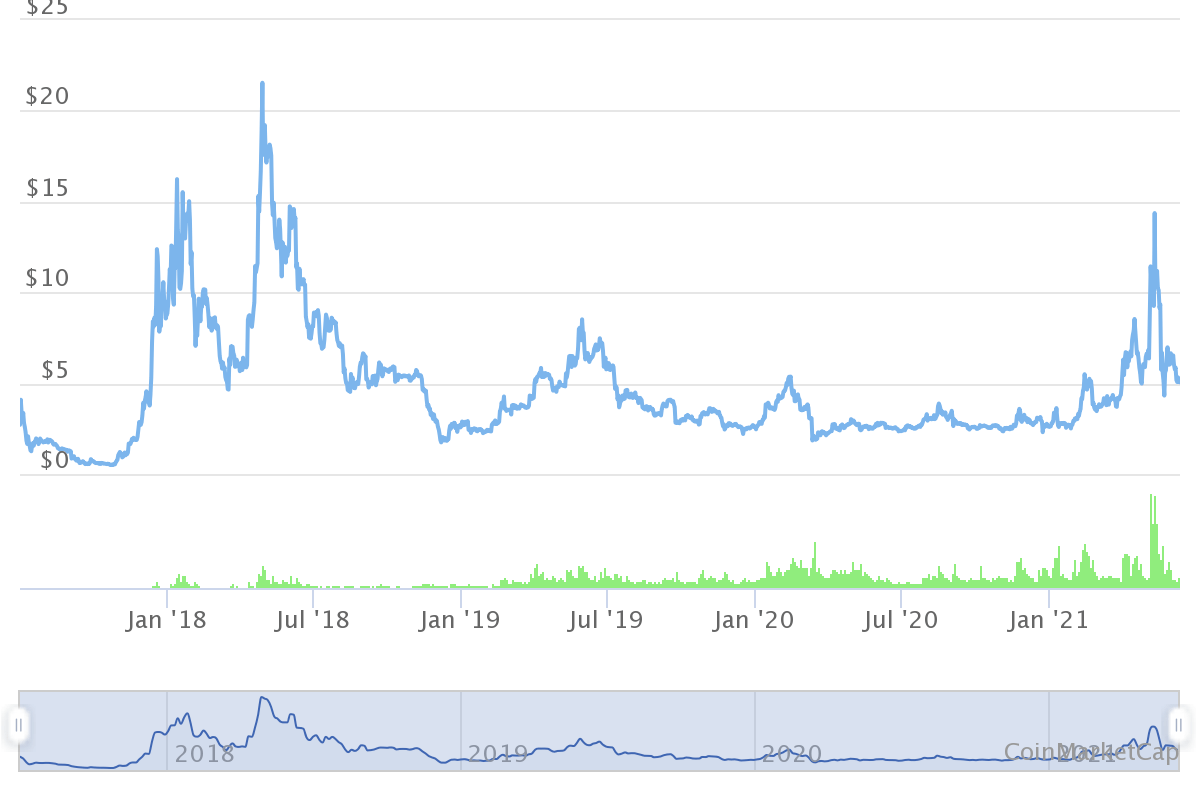 2021 has been an exciting year for EOS investors. The coin entered January with an average price of $2.61. It steadily moved up to $8.72 in April 2021. At the beginning of last month, EOS’s parent company Block.one announced the creation of a new subsidiary crypto exchange company Bullish Global. The news led to a spike in the market as EOS grew by over 50% and hit $14 by mid of May. However, the price fell as sharply as it surged, and EOS is currently trading at $5.40 with a 10% increase in value in the last 24 hours.

What Could Move the EOS Price in June?

The price of EOS seems to be recovering tentatively from its May crash. In this section, we will look at a few factors that could influence the direction of price action for this month.

EOS has begun the process of improving its infrastructure to attract investors. Block.one recently announced that various organisations will review its code as part of the EOS Resource Model proposal. Spielworks is in the process of building a loyalty and rewards platform on EOS.IO that is expected to bring the gaming community to the platform. EOS is also focusing on inviting developers who can build Decentralized Finance (DeFi) applications on the platform to directly compete with Ethereum.

While the EOS platform needs to find ways to incentivise users for staking EOS to promote the long-term growth of the coin, its upcoming initiatives including Bullish, the new crypto exchange that combines the best of centralised and decentralised initiatives, is expected to stimulate better returns for investors, similar to its effect on EOS’s performance in May.

The cryptocurrency market offers exciting prospects to investors for the next few days as tokens are in the process of recovering their lost ground after the May 19th market-wide crash. The recovery period, fueled by the announcement of El Salvador declaring Bitcoin as legal tender, allows investors to buy altcoins that are expected to reach heights in the future at a lower price than usual.

Further, the prices of Bitcoin and other major cryptocurrencies have increased by over 10% since the crash, potentially leading to a ripple effect that could improve the price of tokens like EOS.

EOS reached its yearly high in May, convincing more investors and users to trust the potential of the blockchain. Despite the losses that occurred during the market crash, EOS is heading towards meeting the $7 price level this June. If the currency can push…

EOS Price Analysis: EOS Crypto Price Holding Its Ground Despite The Fall In