USDT/USD has produced a typically tight price range the past week of trading, but its recent activity suggests there is a potential for a speculative wager.

USDT/USD has enjoyed a consolidated price range the past week of trading, but speculators of Tether knew this already. USDT/USD moves within a very tight scope, which offers traders an opportunity to wager on incremental technical moves. Interestingly, the past week of trading, when compared to the overall value of USDT/USD, offers an indication that there is a potential for a speculative endeavor to be pursued.

Since the 10th of March, USDT/USD has seen a large amount of its trading below the 1.0000 level. This has happened as a large segment of the major cryptocurrencies continue to trade within the vicinity of their highs and have sustained rather consolidated value bands the past couple of days. Traders of Tether need to always practice patience and they should use limit orders to take advantage of the incremental moves which underscore the value movements within USDT/USD. Being a quick trader within Tether means that a trader must have the ability to remain alert, but also use risk-taking tactics which reduce the amount of variables that can suddenly develop.

Speculators may look at the current support ratios within USDT/USD as it trades only slightly above the 1.0000 level and choose to be buyers only fractionally above this value. After spending the majority of the past week below the one dollar mark, there may be a potential for Tether to start incrementally traversing upwards and challenge higher values. Choosing to be a buyer slightly above the 1.0000 mark and using the level just a fraction below as a stop loss could prove worthwhile.

For traders who are less conservative and have the capability to hold onto USDT/USD for overnight positions using a further away stop loss may prove appropriate, but if that is done, the amount of leverage chosen within the trade has to be carefully decided upon. Even though USDT/USD does not move with the violent percentage changes of other cryptocurrencies, it does remain a speculative asset which needs proper risk management in order to engage positions correctly.

Buying USDT/USD on the notion that short-term bullish momentum may be generated could prove the right wager. Technically, after trading below the 1.0000 mark predominantly the past week, speculating on a cyclical reversal higher may make statistical sense. 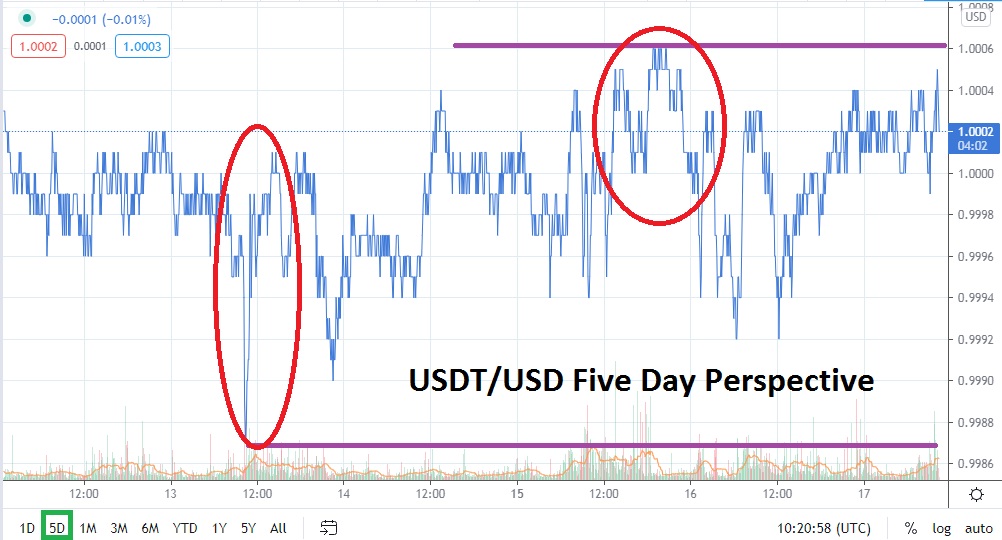 10 Best Cryptocurrencies To Invest in for 2021

Tether Tokens Are Fully Backed According to an Insurance Company