What are NFTs? An Investor’s Guide to Investing in Non-Fungible Tokens

You’ve heard about them by now: non-fungible tokens, or NFT’s for short. These new investments have taken the world by storm, turning digital works of art and collectibles into easily tradable items on the blockchain. 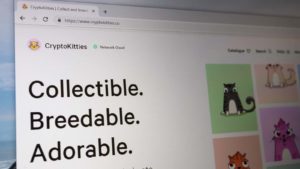 Source: Ricky Of The World / Shutterstock.com

But what exactly are NFTs? How have artists and organizations, from Grimes to the NBA, created millions of dollars in sales? And most importantly, how can regular investors get in early enough to make big profits?

The answers are more straightforward than you think. Though the whole NFT system relies on novel blockchain technologies, the concept of titling and deeding properties has existed since ancient times. And the faster you realize that, the sooner you can concentrate on finding the best investments that will go up in value.

Once you add in the total value of all artwork ever produced, the figure likely tops $1 trillion. Rembrandt, a 17th-century artist, created more than 600 paintings in his lifetime, with each typically fetching eight-figure sums.

Today, we stand at the precipice of change. The NFT market means that you could start making money from things that were once untradable – digital art, music, and even your tweets on Twitter could get sold to a willing audience. And even the traditional world of physical art and collectibles may join the NFT revolution.

This is a market you need to know.

What Does NFT Mean?

NFT stands for non-fungible tokens, an electronic token representing something unique, say a digital piece of artwork or a website domain name. These tokens, in turn, use cryptocurrencies like Ethereum or Cardano to run and validate.

Keep in mind: the NFT isn’t the item itself. Just like a house deed or car title, the NFT represents ownership in the thing. It tells everyone else in the world that you own something, and no one else can lay claim to it. Internet domain names, for example, can get backed by NFTs.

And it gets even better. Because unlike deeds and titles, NFTs can represent virtually anything – a car, an NBA highlight reel, or even a GIF image of a pop-tart cat flying through space. If it’s a unique item that you can lay a legitimate claim to, you can create an NFT for it and make money trading it.

There are some limits. Easily substituted items like dollars or Bitcoin, for instance, can’t become NFTs. There must be some differentiating factor to stake a particular claim on. Non-ownable things also can never become NFTs. A seller might try creating an NFT representing the planet Mars, but no sane investor would buy it. After all, no individual can legitimately lay claim.

Still, there are some crossovers. A 1794 Flowing Hair Silver Dollar (a rare coin that sold for $10 million in 2013) is technically a minted dollar. But it’s rareness and historical significance means it holds a value far beyond its original amount. An NFT representing a similar asset will act the same way.

We’re admittedly a strange species. Over centuries, we’ve made multiple billion-dollar industries around collectibles and artwork. Not only are millions of people employed in creating these items. Today, mega-cap companies from high-end auction houses Sotheby’s and Christie’s to online firms like eBay and Etsy help us transact and earn a living from our collections. People spend small fortunes on insurance against fraud and damage. And people in the know can get quite wealthy.

NFTs are an extension of the same principle. Though digital artwork is faster to copy and distribute, many people still have a fundamental desire to own the original piece. A combination of love and pride drives many; Brunei’s Sultan reportedly owns 7,000 cars in his collection.

But others want to reward the…

Read More:What are NFTs? An Investor’s Guide to Investing in Non-Fungible Tokens

Which crypto to buy today? Here’s a 7M guide to build a smart crypto portfolio

Bitcoin and taxes: EY cryptocurrency expert details what to know

Online Gambling Guide: How it Works

Deepfakes And Disinformation: The World Of Manipulated Media (Podcast) –